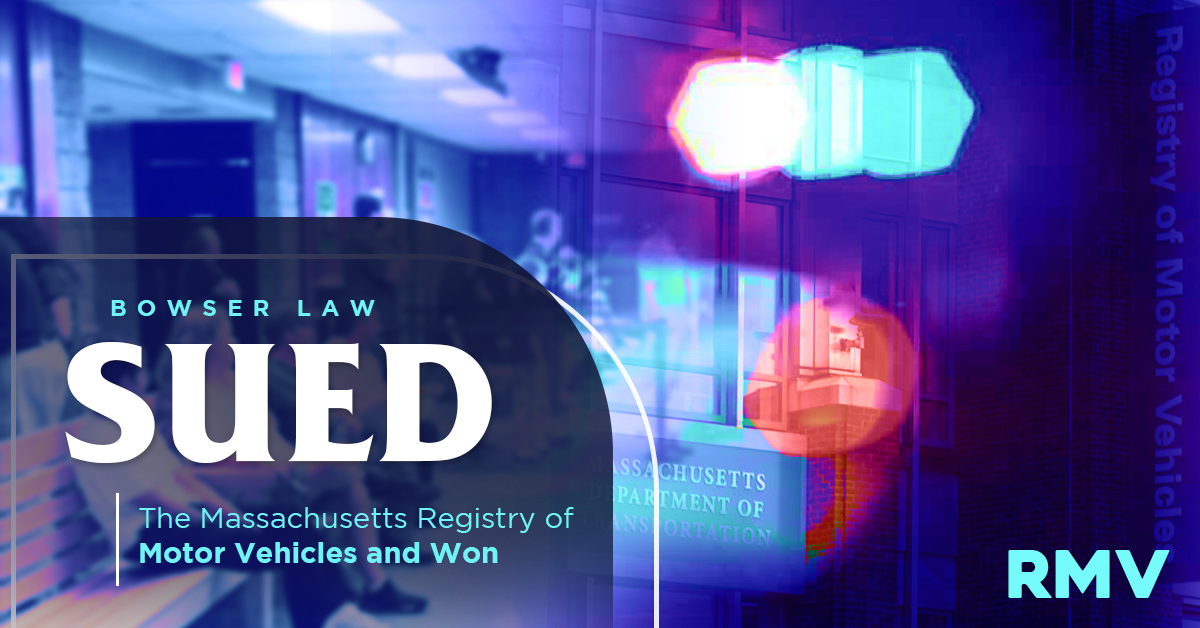 The Registry of Motor Vehicles (RMV) is unfortunately very hard to work with. They are not very customer friendly and seem to operate under their own set of rules. Most recently the RMV has begun to routinely ignore valid Court orders to reinstate driver’s licenses and orders from the Board of Appeal.

Recently, Bowser Law stood up to the Registry of Motor Vehicles and sued them.

There was an issue that was affecting many of our clients who hold a New Hampshire drivers’ license. A New Hampshire resident often times losses their privilege to drive in Massachusetts under Melanie’s Law’s Lifetime Lookback provisions and their license is also be revoked by the New Hampshire DMV because they are listed in the National Drivers Registry (NDR) as suspended in Massachusetts. For many years, we would file a request with the Board of Appeal and the Board could grant hardship relief. The Board order would clear the out of state driver from the NDR. The New Hampshire resident could then go back to New Hampshire and get their license restored. If they file appropriate affidavits with the MA RMV, they are also relieved from installing an ignition interlock device as well.

However, the RMV changed their software in 2018 and as a result of that software change, the RMV would no longer list a driver from New Hampshire, who was granted relief by the Board of Appeal, as eligible or cleared. When our firm obtained a valid order from the Board to clear a driver from the National Drivers Registry, the RMV would not do it. The RMV Driver Control Unit claimed that this was a “software issue” that could not be corrected and was beyond their control.

To secure justice for one of our clients, Bowser Law sued the RMV in Suffolk County Superior Court. On the day of the hearing, the RMV came forward through the Attorney General’s Office to inform the court that they had fixed the software problem. As a result of our lawsuit, this issue has now been eliminated and valid orders for relief from the Board of Appeal are now going forward allowing out of state drivers to be cleared and listed as “eligible” in the NDR. This will benefit all similarly situated out of state drivers going forward.

Experience with the laws in both Massachusetts and New Hampshire matters. It was a long and hard fight to protect the rights of our client. That is what we do at Bowser Law. We fight.