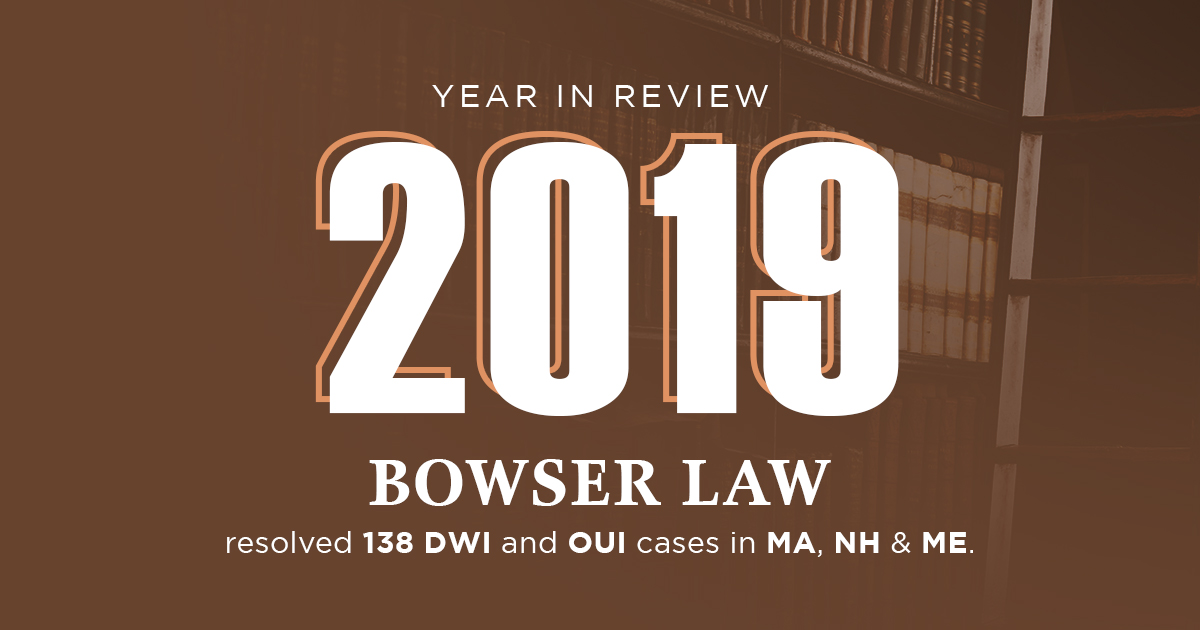 2019 was another busy year at Bowser Law for OUI/DWI defense in Massachusetts, New Hampshire and now Maine. Bowser Law concluded 138 Drunk Driving Defense cases in these three states in 2019.

Some interesting numbers from these totals:
76 % of the total cases were resolved with a not guilty verdict, outright dismissal, or a negotiated plea to a lesser OUI/DWI offense.

15 Jury Trials with 8 not guilty verdicts.

17 Bench Trials with 13 not guilty verdicts.

In New Hampshire, where Prosecutors are allowed to negotiate with the defense for the outright dismissal of the DWI/DUI charge, oftentimes in return for a plea to a lesser civil infraction of Reckless Driving or Negligent Driving, this occurred in 43 out of 85 total New Hampshire cases. These types of dispositions are earned through knowledge, experience, preparation, research and the willingness to challenge the State’s case, even if that means losing an administrative license suspension (ALS) at the DMV in order to prepare a better defense of the DWI criminal charge. This type of non DWI outcome is incredibly important for many Massachusetts residents facing a NH DWI charge, where the collateral administrative consequence in Massachusetts imposed by the MA RMV under the Lifetime Lookback provisions of Melanie’s Law is far worse than any penalty imposed by the NH Court on the DWI. The majority of Bowser Law’s NH DWI clients are Massachusetts residents, many of whom are dealing with at least one prior OUI offense under Melanie’s Law.

Where a plea was voluntarily negotiated and entered to a DWI offense in 33 NH cases, 12 were the result of an Aggravated DWI being reduced to DWI 1st to avoid mandatory jail and extended license loss with an ignition interlock device upon restoration. An additional 12 cases were originally charged as a subsequent offense (2nd/3rd or 4th offenses) but were reduced to a lesser DWI charge and other related motor vehicle, misdemeanor of felony charges were dismissed as part of the plea negotiations.

In Massachusetts the defense is almost entirely limited to pleading to the OUI offense as charged or proceeding to trial. In 49 MA OUI cases, a voluntary plea was entered in 22 cases. 6 of those 22 pleas resulted in a 1st offense Cahill disposition, where the complaint charged OUI 2nd. One was an OUI 4th felony complaint, resolved by plea to a misdemeanor OUI 2nd. 15 pleas resulted in a continuance without a finding (C.W.O.F.) on an OUI 1st complaint. Many of these dispositions were entered for New Hampshire residents facing the MA OUI charge, to allow them to retain their valid New Hampshire licenses. This year included a critically important appeal in NH related to the NH DMV’s treatment of a MA OUI C.W.O.F. disposition. It was a Bowser Law client.

27 of the original 49 Massachusetts OUI cases proceeded to bench or jury trial or a decision on complaint applications to the clerk/magistrate (2). 21 out of 27 cases resulted in a not guilty verdict or outright dismissal of the OUI charge. The majority of these cases involved subsequent offenses under Melanie’s Law Lifetime Lookback provisions with mandatory jail, felony conviction, and extended license loss hanging in the balance.

In Maine, 1 of the 4 OUI cases resulted in a plea to a lesser offense of Reckless Driving, which was certainly important to the Massachusetts resident. The other 3 matters were resolved by plea to an OUI 1st charge, where the complaints were amended to remove mandatory jail sentences for prior offenses, elevated breath test results >.15, or refusal of the chemical test. The Maine OUI Defense practice continues to grow, especially among residents of Massachusetts and New Hampshire struggling to understand the reciprocity issues at home.

Significantly, Attorney Bowser continues to be a leading practitioner in the area of reciprocity license/privilege suspension issues between his three (3) states of practice: Massachusetts, New Hampshire and Maine. If you are facing a drunk driving charge in any of these three (3) jurisdictions please call our office to schedule an initial free consultation. A great defense travels, and plays well anywhere.